“Every colour has a meaning” 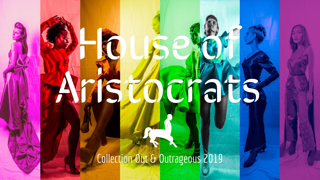 Fa Rukh is a rare type of man. Pakistan born and bred, forensic dentistry major, and abandoned by his family when he came out as gay. If you took those three facts and tried to imagine a person, you would probably conjure up the image of a man that’s pessimistic and maybe just a tad stern.

When I met him for coffee I was struck by how friendly and open he was. A man full of hope for the future and ready to greet anything that comes his way with the smile. He was dress to match his passion for fashion designing, ripped jeans, black tank top and hand made jacket.

For Dundee Pride, Fa designed a line of clothes for his brand House of Aristocrats corresponding with each colour of the LGBTQ+ flag with models of various ethnicities, sexualities and genders. The beautiful blue dress he showed me, worn by a drag queen, featured homophobic slurs written on the models back, slurs thrown at Fa throughout his life in Pakistan and the UK.

It was during his forensic dentistry masters at the University of Dundee that he was abandoned by his parents. He tells me that, “the fashion thing came in between the process when I was so upset and depressed, thinking I don’t have value, I need to maybe show people that I am more than what you guys think of me.”

However, while fashion designing was his window to get him through that hard time in his life, the passion to make clothes was always there. “This was a thing I was doing since my childhood. I started maybe from dolls, then my sister, then everybody.”

The name House of Aristocrats comes from his belief that “It doesn’t matter which class you belong to, which kind of social background, everyone is an aristocrat.”

The Pride collection was inspired by his own journey and what he went through, creating a collection that is more than just about looking good, with each colour representing a story and a meaning. “Every colour has a meaning, and I was like which person this flag represents, and I felt this flag represents all of the people, just their lives, not the rich person, not the black, not the white, everybody who has hope in there, who has been through a healing phase. The LGBT flag is for them.” He says, sounding so firm in his belief of inclusivity.

The impact of his clothing line is a little bit different, more for people who went through, or are going through a similar situation to him. He wants to tell people coming from Pakistan to have heart. To stay strong when bad things happen because they can be more than what society expects.

This year at Pride, Fa will be introducing his fashion to Dundee. He hopes to create high fashion that everybody can afford and love. So if you go along, take a look at his stall and all the unique handmade shirts for sale. If you can’t go to Pride, look him up on Facebook @apparelmetanoia and show Fa the love that he so clearly deserves.