What If It’s Us by Becky Albertalli and Adam Silvera 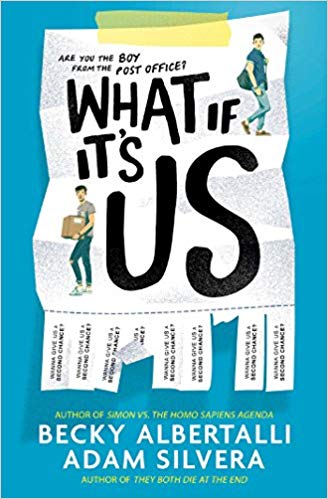 Because I just have amazing timing in life (can you sense the approaching sarcasm?) I picked up What If It’s Usthe same day Becky and Adam were finishing off their UK tour in Manchester. Amazing timing, right? I couldn’t bring myself to stalk through their Instagram’s to see if they had been to Edinburgh. I’ll just have to wait for their next UK tour and pray that I don’t miss it.

But now to this very spoiler review, so please come back after you’ve read it or witness my ‘oh-my-god I love this book but why’ rant. It’s going to be bad. I finished it at 3am last night after reading it for an entire day, only breaking to work on my own novel. Final warning.

First things first: this book is amazing. The writing is amazing, the characters and their depth, the storyline. It’s all brilliant. There were moments in the book that where I felt so mortified on the character’s behalf that I had to put the book down, take a breath, and start again (it took me a week to pick up A Court of Mist and Fury again when I got to thewedding scene). Those scenes were so well written that you could feel exactly as the character’s were feeling in that situation, makes the book utterly immersive.

And Arthur was amazing. Ben summed him up perfectly: he has no chill and that’s what makes him so lovable. He is so over the top and such a disaster that he’s perfect. And he slightly reminds me of myself purely because of how hopeless I can be in social situations. It was still annoying when Arthur immediately reacted to some situations (like when he thought Ben had been cheating on him with Hudson) and immediately went from zero to a hundred with his emotion response. It added drama that just told us how deeply Arthur had fallen for Ben, and Ben’s total heartbreak at them breaking up told us the same.

Ben was a more chilled out character. He was more hesitant to get into a relationship so soon after breaking up with his ex (Hudson), which is completely understandable, but that didn’t stop him from completely falling in love with Arthur. The part of the ending where he pulled together that elaborate, Broadway worthy even, plan for Arthur at the end to show just how much he really cared was perfect and it was completely what Arthur deserved.

Now that ending. The ending that had be snapchatting to all my friends in full capitals in despair. Arthur still went back to Milton and Ben didn’t want to try a long-distance relationship, didn’t think they could handle it, so instead they stayed as best friends, which is completely understandable. But so utterly frustrating, especially with the fifteen-month time jump during the epilogue that shows just how in love they still are. Becky and Adam left it open, hinting at how Arthur and Ben could get together again in the future. Which just isn’t good enough for this reader is so invested in this relationship that I might as well be Arthur. I can understand why some readers were so disappointed, I was too, but there was no other way it could have ended.

We were disappointed because the ending is realistic instead of fairy tale esc. The ending showed us what would have happened in real life and that is why it frustrated us so much.

Until the movie comes out, the rights have been sold to the makers of 13 Reasons Why, I’ll just be listening to the Dear Evan Hansen soundtrack on repeat. And maybe rereading the book if it the wait gets too much.