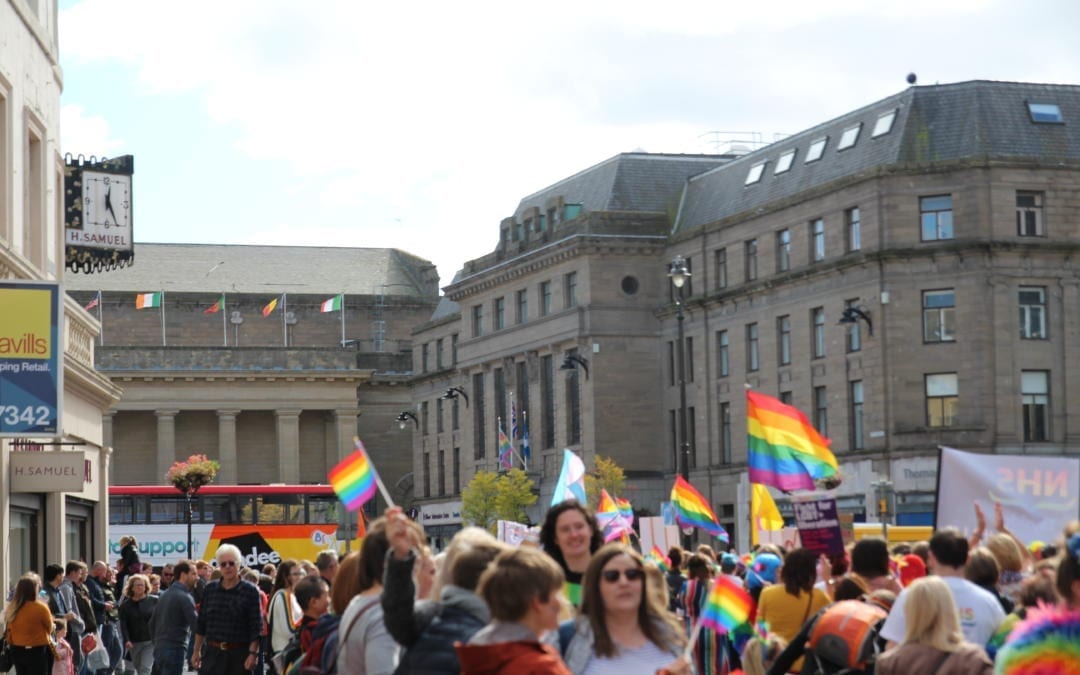 The community of Dundee came together on Saturday to celebrate love and equality with the city’s first ever Pride. Crowds of people, all in a contagious electrifying mood, gathered in the City Square to get ready for the march. Hundreds were wearing Pride flags as capes, making them look like modern day superheroes.

Sponsors from all around the city and Scotland (including the University of Dundee and St. Paul’s Cathedral), joined the parade with personalised banners to march alongside the thousands of people in attendance. The half-hour march in the sunshine filled streets, and looped back to the City Square, where the festivities were continued with a small yet bustling market, as well as live performances on the stage.

Dozens of Drag Queens and participants in full rainbow attire attended the march, standing proud amongst a crowd that gave them nothing but compliments. For the day everyone had enough courage to fully embrace their sexuality in public, whether they did so by wearing pansexual coloured socks or by strapping glittery wings to their backs. The knowledge that they weren’t going to be judged or shamed for being themselves made the mood of the day even more excitable and pure.

Two of the more casual parade attendees (both freshers), loved the message of pride. One of them said: “I think it’s great to celebrate the differences in societies and I think its important to know that there is someone out there that is just like you, going through the same stuff as you, and can relate to you, just so you know that you’re not alone.” This statement captures the essence of Pride perfectly.

The other fresher (an international student from Spain), said “I like the people fighting for the equality and how it should be and how that brings a community together.”

Saturday’s parade arrived just in time for the LGBTQ+ community to come together, still riding the high from the events of the 6thof September, when gay sex was finally legalised in India (before it was punishable with a 10-year prison sentence), to the elevated response of the Indian LGBTQ+ community, public and all others around the world.

The obvious success of Dundee’s first Pride in bringing the people together, and the fact that all proceeds from the event will fund the next one, promises that 2019 Dundee Pride will be even better, bigger and prouder.